Russian Foreign Minister Sergei Lavrov attended the UN General Assembly in New York last week, where he commented on everything from the peace process in Ukraine to Iran's nuclear talks and U.S. air strikes in Syria. On Saturday, Lavrov sat down with Bloomberg's Olivia Sterns in an exclusive interview to recap his thoughts on Russia's role in a tense geopolitical landscape.

Watch video
Posted by harry_the_great at 13:59 No comments:

It's China-Russia vs. Japan-America. Too bad for Japan.

Threatened by deep, fundamental changes about which they can do little, men will reliably choose denial as a last line of defense.  Given the Orwellian nature of the Western political discourse, it is not surprising that the secular rise of China has spawned a veritable cottage industry of Sinophobes, who for the past several decades have issued increasingly dire warnings of the upcoming collapse of the upstart Dragon – which in the meantime has grown its economy nearly ten-fold.

The arguments range from the cogent (trees do not grow to the sky) to the patently absurd (“China will emulate Japan” - although the similarities between the two are largely confined to use of chopsticks and the sharing of a pictographic script…) China has, of course, tacitly encouraged this blather, which coupled with convenient and reassuring myths about win-win outcomes, the inability of Asian to innovate and platform companies - has blinded Western elites to the challenge posed by the reemergence of China.

China’s relationship with Russia is a special case. The present author has been spinning his “Bear and Dragon yarn” since the turn of the millennium - at long last, he finds himself vindicated by Russia’s growing alignment with the People’s Republic, greatly accelerated by the aggressive posturing of the NATO countries as their coup d’état in Kiev reaches an increasingly sticky outcome.

Agree with Truth & Beauty (and Russian Finance): "This would be a potential disaster! We have to hope he keeps the sanctions in place - these literally force Russia to do what should have been done a decade ago. It is vital that Moscow continues to rebuild its independence against potential Western economic blackmail. When it has a geographically diversified, balanced economy based upon trading and financial relations with the BRICS, and especially, with the Dragon - then it can turn around and trade freely for commercial gain with The Empire."

The united States President Barack Obama said on Wednesday that the country would lift the sanctions imposed on Russia in case it chooses a peaceful course in Ukraine.

The Seething Anger of Putin's Russia

The truth is out there...

MOSCOW—The standoff between Russia and the West over Ukraine is a relatively recent development, but it is sickeningly familiar to anyone who grew up in the Cold War decades. It is, most of all, uniquely ominous: When nuclear-armed America and Russia quarrel, peace and life as we know it are threatened the world over. The risks of errors, miscalculations, unintended escalation, and culture-based misunderstandings loom large—especially when mutual trust has been shattered and little remains of a working relationship between Washington and Moscow.

Such risks are especially high right now. NATO and NATO-allied forces are conducting military exercises in western Ukraine, while Russian-backed separatists and Russian troops remain entrenched in that country’s east. Last Wednesday, Russian Defense Minister Sergei Shoigu warned that “the situation in Ukraine has escalated sharply and the presence of foreign military has increased in the immediate vicinity of our borders,” while announcing the deployment of the first of six stealth submarines to its Black Sea fleet. This came just days after Russia’s successful submarine-based test launch of a Bulava ICBM—a long-range nuclear missile designed to hit targets in the United States. Russia’s $700-billion defense buildup, scheduled to be completed in 2020, continues unabated.

Ukraine isn’t the only potential hot spot. Earlier this month, a representative of the Russian Ministry of Foreign Affairs, addressing Russian residents of Riga, the capital of NATO member Latvia, announced, in words similar to those it has used to describe the situation in Ukraine, that as a result of “neo-Nazi sentiments ... whole segments of the Russian world ... face serious problems in securing their rights and lawful interests,” and warned that Russia “will not tolerate the creeping offensive against the Russian language” underway in the Baltics. In a speech several weeks ago in the Estonian capital of Tallinn, President Obama declared that “the defense of Tallinn and Riga and Vilnius is just as important as the defense of Berlin and Paris,” and that NATO forces, including those of the United States, would defend the Baltics if they were attacked. The prospect of Russia taking measures—which could include closing its airspace to Western countries—to retaliate against the latest round of Western sanctions against it now seems like the least of our problems. (Ironically, the West’s crisis with Russia, though deepening, may all be for naught: The Kremlin has successfully pressured Ukraine into delaying a key free-trade provision in a newly ratified association agreement with the EU and offering its rebellious eastern provinces three years of self-rule.)

Putin Would Win Elections in France and Germany

"Public opinion polls in Germany and France showed that Putin would win the presidential elections in both countries ..." — this idea was voiced on the sidelines of the International Forum "The large family and the future of humanity", which concluded on September 12 in Moscow. In an interview with the Russian TV channel "Tsargrad", Konstantin Malofeev, chairman of the board of trustees of the St. Basil the Great Charitable Foundation and one of the organizers of the Forum spoke on the issue.

From the 1960s to the 1980s, Arkady Bronnikov visited correctional facilities all over the Soviet Union and photographed thousands of tattooed inmates to decode their body art – and helped solve many crimes by identifying criminals based on their ink. Here, you can learn what roses, snakes and cowboys really mean …

Posted by harry_the_great at 12:19 No comments:

24 hours in Moscow - in pictures

To celebrate the Russian capital’s birthday, The Moscow Times photojournalist Pascal Dumont documented a 24-hour journey across the city. Starting on Friday evening in Rechnoi Vokzal (River Station) in the north and finishing at sunset in the south in Butovo, Dumont captured the metropolis’ dynamic character through it’s daily cycle 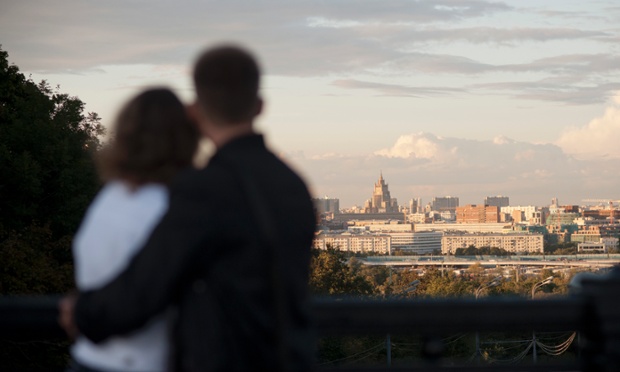 Posted by harry_the_great at 12:58 No comments:

Germans were confronted with images of their country’s dark past on Monday night, when German public broadcaster ZDF showed video of Ukrainian soldiers with Nazi symbols on their helmets in its evening newscast. In a report on the fragile cease-fire in eastern Ukraine, Moscow correspondent Bernhard Lichte used pictures of a soldier wearing a combat helmet with the "SS runes" of Hitler’s infamous black-uniformed elite corps. A second soldier was seen with a swastika on his gear. “Volunteer battalions from nearly every political spectrum are reinforcing the government side,” the ZDF correspondent said in his report.

The video was shot last week in Ukraine by a camera team from Norwegian broadcaster TV2. “We were filming a report about Ukraine’s AZOV battalion in the eastern city of Urzuf, when we came across these soldiers,” Oysten Bogen, a correspondent for the private television station, told NBC News. Minutes before the images were taped, Bogen said he had asked a spokesperson whether the battalion had fascist tendencies. “The reply was: absolutely not, we are just Ukrainian nationalists,” Bogen said.

Ukrainian soldiers with Nazi symbols on their helmets, including the swastika and the SS runes of Hitler's infamous black-uniformed elite corps.

Posted by harry_the_great at 13:27 No comments:

Posted by harry_the_great at 14:33 No comments:

Marine Le Pen, the leader of France’s far-right National Front party, says the EU is to blame for the crisis in Ukraine as it forced the situation where Kiev had to choose between East and West.

Now that France is joining sanctions against Russia over the alleged direct interference in the political crisis in Ukraine and Paris is considering suspending the €1.2 billion deal of two Mistral helicopter carrier ships ordered by Russia, the leader of the biggest parliamentary faction of the French parliament has her own opinion on Ukraine’s turmoil.

“The crisis in Ukraine is all the European Union’s fault. Its leaders negotiated a trade deal with Ukraine, which essentially blackmailed the country to choose between Europe and Russia,” Le Pen told Le Monde daily in an interview.

Le Pen has been a long-standing critic of Europe’s foreign policy and does not see how Ukraine could join the bloc.

Petro Poroshenko's announcement comes after a phone conversation he had with the Russian president, Vladimir Putin


The Ukrainian president, Petro Poroshenko, said he would order a ceasefire to begin at lunchtime on Friday if peace talks that are planned to be held in Minsk, Belarus, are confirmed.

Speaking on the sidelines of a Nato summit in Wales, Poroshenko said: "At 2pm local time [11am GMT] on Friday, provided the [Minsk] meeting takes place, I will call on the general staff to set up a bilateral ceasefire and we hope that the implementation of the peace plan will begin tomorrow."

The announcement comes after a phone conversation between Poroshenko and Vladimir Putin on Wednesday. The Russian president later released a seven-point "peace plan" for eastern Ukraine.

How can you tell whether Russia has invaded Ukraine?

Last Thursday the Ukrainian government, echoed by NATO spokesmen, declared that the the Russian military is now operating within Ukraine's borders. Well, maybe it is and maybe it isn't; what do you know? They said the same thing before, most recently on August 13, and then on August 17, each time with either no evidence or fake evidence. But let's give them the benefit of the doubt.

You be the judge. I put together this helpful list of top ten telltale signs that will allow you to determine whether indeed Russia invaded Ukraine last Thursday, or whether Thursday's announcement is yet another confabulation.

Because if Russia invaded on Thursday morning, this is what the situation on the ground would look like by Saturday afternoon.

The Chart Obama Does Not Want Merkel To See

The weekend's headlines reeled from the collapse in global manufacturing PMIs and with them the last best hope for the world's economies to reach escape velocity all on their own. However, there was one nation that did not plunge... there was one country whose growth (based on the soft survey data) is at 10-month highs. Perhaps this is the chart that President 'we need moar sanctions and costs' Obama does not want Angela 'umm, wait a minute' Merkel to see...

Since sanctions began the plunge in Euro-Area PMIs has been commensurate with the rise in Russia's (oh and according to survey-data, US is as good as it has ever been)...

Seems pretty clear who is paying the price and suffering the costs of Western sanctions...

When does Europe draw its own red line around Obama's sanctions?

Posted by harry_the_great at 16:23 No comments: 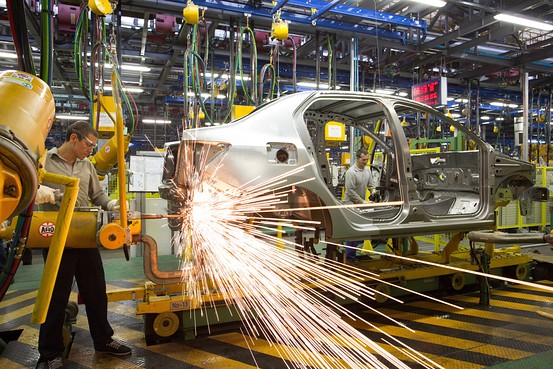