In a Las Vegas fundraising speech on Monday, she reveals her distaste for his "personality" 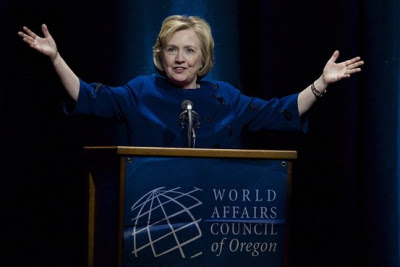 Incompetent in international affairs. Its going to hurt her chances of becoming
president, something she desperately wants...


This is very interesting. Speaking at a fundraiser in Las Vegas on Monday, Hillary Clinton ripped into Putin, and lectured Europeans on being too soft on him.  Her remarks suggested a deep personal distaste for the man.

More than anyone else, Clinton is the author of the confrontational US approach to Russia, and the current debacle in Ukraine.

Under her watch as Secretary of State, from 2009 to 2013, the US steadily increased its anti-Russian line, and pushed for Ukraine to choose between Europe and Russia, plowing $5 billion into anti-Russian civil society groups in the Ukraine.

The disastrous previous US ambassador to Russia, Michael McFaul, was her man in Moscow.  Victoria Nuland, whom she made State Dept spokesman, was and remains one of her closest advisors on Russia. She promoted the career of US ambassador to Ukraine Geoffrey Pyatt, who is also very close to her.  He also pushed very hard for the tragic split of the Ukraine.

Here are some choice quotes:

"I see a very cold-blooded, calculating former KGB agent who is determined to ... enrich himself and his closest colleagues..."

"Aside (from) his personality, ... his agenda is one that threatens American interests."

She went on to lecture Europe on how it should deal with Putin echoing US Vice President Biden's gaffe of last week:

Some Europeans “just don’t want to confront Putin in any way,” ... “I think that’s a mistake."

“I think there was an unwillingness on the part of the Europeans to commit to (energy independence from Russia),” ... “Each country was pretty much looking out for its own energy needs. Now, of course, they’re scrambling to figure out how to get out from under Russian intimidation..."

Our comment:  This really sums up perfectly what is at the heart of the US's mistaken policy towards Russia. Clinton's remarks reveal a breath-taking lack of understanding of what happened in Ukraine and how best to deal with Russia.  Demonstrating a very primitive grasp of international affairs.  She put people into positions of influence in US policy making who share her view.  Its not so much excessive aggressiveness that is the problem with Clinton and her advisors, rather gross incompetence.

Her condescending attitude towards Europeans is going to go over like a lead balloon in Paris and Berlin.

We believe that as the Ukraine turns into more and more of a debacle for the US, Clinton is going to be attacked by both Republicans in the US, and Europeans, especially Germany and France, for having engineered a disaster in the Ukraine, and Russia relations overall, and that this will seriously damage any chance she has of becoming president.

Here's the full report from the Wall Street Journal:

As a newly minted secretary of state, Hillary Clinton seemed convinced that she could bring about a thaw in America’s chilly relationship with Russia.

In a speech Monday night in Las Vegas, Mrs. Clinton depicted Russian President Vladimir Putin as a mortal threat to sovereign European countries and U.S. interests. She called for a sustained commitment to keep him contained.

Mrs. Clinton, a likely presidential candidate in 2016 warned that under Mr. Putin’s leadership Russia is using military power in combination with its leverage as an energy producer to cow European leaders.

Some Europeans “just don’t want to confront Putin in any way,” Mrs. Clinton said in a question-and-answer session that was part of a paid speaking engagement sponsored by the UNLV Foundation. “I think that’s a mistake. I think he is at heart a bully and you have to be smart; not confrontational, but you have to stand up and you have to encircle and you have to try to choke off his ability to be so aggressive.”

Mrs. Clinton’s appearance had drawn protests from student leaders at the university, who objected to her $225,000 speaking fee. Mrs. Clinton has said she won’t pocket the money but will instead plow it into her family’s charitable foundation.

She received a warm reception at the event, held at the Bellagio hotel. The moderator, Las Vegas Sun Publisher Brian Greenspun, gave her a pair of running shoes as a gift. The shoes were a nod to her possible political ambitions — and also a light reference to her appearance in Las Vegas six months ago when someone in the audience hurled a shoe at her.

Famously, former President George W. Bush said in 2001 that he had looked Mr. Putin in the eye and found him to be “straight-forward and trustworthy.”

Asked how she perceived the Russian leader, Mrs. Clinton said: “Well, I see a very cold-blooded, calculating former KGB agent who is determined to not only enrich himself and his closest colleagues, but also to try to revive Russia’s influence around its border.”

The line echoes one used by Sen. John McCain (R., Ariz.) who while running for president in the 2008 election said he looked into Mr. Putin’s eyes and saw “three letters: A K, a G, and a B.”

Should Mrs. Clinton run for president in 2016, opponents are likely to call attention to the moment in 2009 when Mrs. Clinton and her Russian counterpart pushed a mock “reset” button to symbolize a new era of good will.

The rapprochement ultimately fizzled. With Russia’s annexation of Crimea and incursions into Ukraine, U.S.-Russian relations have hit a post-Cold War low point.

No more is Mrs. Clinton talking of a reset.

She warned of allowing “the borders of Europe — after the bloodiest century in human history – to be rewritten the way Putin is trying to rewrite Ukraine and threatening other places as well. We cannot let that happen because there will be no stop to it.. … Put aside his personality, his agenda is one that threatens American interests and we have to be smart about how we’re going to contest it.”

As secretary of state she said she warned Europeans that they needed to “move toward energy independence” so that they wouldn’t be so reliant on Russia.

“I think there was an unwillingness on the part of the Europeans to commit to that,” she said. “Each country was pretty much looking out for its own energy needs. Now, of course, they’re scrambling to figure out how to get out from under Russian intimidation using energy as a weapon. And the United States needs to stay deeply involved in working with our allies in Europe – to move them toward more energy independence.”

As ever, Mrs. Clinton fielded the inevitable question: Will she run for president?

And, as ever, she gave an answer that was noncommittal. Yes, she’s considering it. She wants to find ways to help people, but hasn’t decided whether the presidency or her family foundation is the best vehicle.

“As I make my decision, part of what I will be thinking about is, What do I want to do with the next years of my life,” said Mrs. Clinton, who will turn 67 on Oct. 26. “How do I want to spend my time?”

Source
Posted by harry_the_great at 15:27