Rethinking the cost of Western intervention in Ukraine

Samantha Power, the U.S. ambassador to the United Nations, recently cautioned Americans against intervention fatigue: “I think there is too much of ‘Oh, look, this is what intervention has wrought’ ... one has to be careful about overdrawing lessons.” Say what? Given the calamities wrought in Iraq, Libya and now Ukraine, one would think that a fundamental rethinking and learning of lessons is long overdue. The United States needs a sober look at the actual costs of supposed good intentions divorced from realism.

Power’s comments come as Ukraine marks the one-year anniversary of the beginning of the Maidan Square demonstrations in Kiev, surely an occasion for rethinking and changing course. One year after the United States and Europe celebrated the February coup that ousted the corrupt but constitutionally elected president of Ukraine, Viktor Yanukovych, liberal and neoconservative interventionists have much to answer for. Crimea has been annexed by Russia. More than 4,000 people have lost their lives in the civil war in Ukraine, with more than 9,000 wounded and nearly a million displaced. This month, the Kiev government acknowledged the de facto partition of Ukraine by announcing it was ending all funding for government services and social benefits including pensions and freezing all bank accounts in the eastern districts that are in revolt. The Ukrainian economy is near collapse with nowhere near the billions needed to rebuild it at hand. How Kiev or the cut-off eastern regions will provide heating and electricity to their beleaguered people as winter approaches remains to be seen.

The European Union and the United States have imposed sanctions on Russia, with threats of more to come. Many observers have rightly suggested that we are witnessing the beginnings of a new Cold War. U.S. and NATO forces are being dispatched to buck up the purportedly nervous Baltic nations, now part of NATO’s security guarantee. Meanwhile, the sanctions have added to Europe’s economic woes. Vladi­mir Putin’s popularity has soared within Russia, even as the nation’s economy has suffered. European unity has begun to fray, with several countries worried about the effect of sanctions on their own economies, and officials questioning the sanctions’ effectiveness.

"It’s my 10-page forecast of Ukraine’s near future, based on facts and other things I can so far speak about only allegorically," journalist Yury Kot writes.

Making predictions is a thankless job. The most dangerous part of it is the temptation to indulge in wishful thinking or self-deception. So instead of being guided by my wishes or fears, I will try to remain unemotional and impartial. I’ll only stick to the facts and possible scenarios for what comes next.

Two landmark events occurred over the weekend, which will shape the course of events not only in Ukraine, but throughout the world: a G20 meeting in Australia and a protest rally in Bratislava. The first witnessed some unpleasant but remarkable events involving Vladimir Putin. The second was attended by Ukrainian President Petro Poroshenko. And then the two men each made statements, as an afterthought. In an interview with the German TV channel ARD, Putin warned the world about the danger of rising neo-fascism in Ukraine, while Poroshenko declared that Ukraine was prepared to war with Russia.

These two statements were preceded by events in Australia and Slovakia. Thus, cold and danger were in the air on the warm continent, so thick you could cut them with a knife. The US and its puppets (now it’s clear where the trillions of dollars went, turning the US into a giant debtors’ prison for ordinary Americans) staged a “show bashing” for the leader of the Russian world. They acted downright boorishly, doing all they could, first, to anger the imperturbable and enigmatically smiling head of the Russian Federation, and second, to endear themselves to the host with his million-dollar smile.

So what did in fact happen at the G20 summit?

The short answer is that it was a shriller rerun of the ASEM summit in Milan. The same line up of European leaders joined this time by the Australians and the Canadians (Obama and Putin barely met) tried once again to bully Putin into doing what they wanted in the Ukraine, believing on this occasion that the fall in oil prices and in the rouble would make him more amenable. In order to drive the point home a media blitz of quite extraordinary intensity was also orchestrated.

To their collective bafflement and anger, Putin refused to move an inch. On the contrary Putin's position has if anything hardened since Milan as he made clear in the interview he gave to German television in Vladivostok (before the summit) in which (as I pointed out previously) he pointedly reminded the European leaders that it is within Russia's power to bring the entire Ukrainian financial edifice crashing down by calling in its loans and in which he also gave the clearest possible warning that Russia would not allow Novorossiya to be overrun (see below on this Page). The further news on that today by the way is that Russian Economics Minister Ulyukaev has confirmed that the rouble will be allowed to circulate in the DPR/LPR, strengthening their integration with Russia.

This "Putin Isolated" Nonsense Is Dangerous

These headlines are silly:

Even more silly then those headlines was the German prime news Tagesschau which used a picture of Putin seemingly sitting alone at a lunch table to prove his "isolation". But news service pictures show that he is sitting with the Brazilian president Dilma Rousseff waiting for the other lunch guests to sit down next to them. These were simply not visible in the frame Tagesschau selectively used.

Russia To Dump SWIFT Within a Few Months

Russia intends to have its own international inter-bank system up and running by May 2015. The Central of Russia says it needs to speed up preparations for its version of SWIFT in case of possible ”challenges” from the West.

"Given the challenges, Bank of Russia is creating its own system for transmitting financial messaging... It’s time to hurry up, so in the next few months we will have certain work done. The entire project for transmitting financial messages will be completed in May 2015," said Ramilya Kanafina, deputy head of the national payment system department at the Central Bank of Russia (CBR).


Imagine that at the start of 2014 you were an investor who liked to dabble in the commodity markets. You could sniff something going seriously wrong in Ukraine and you were alarmed by early reports of groups of militants marauding across northern and western Iraq.

With hopes that the global economy would continue to strengthen, the smart money would have been on oil prices continuing to climb. That’s what geopolitical tension plus robust demand usually means.

On this occasion, though, the smart money was wrong. After standing at well over $110 a barrel in the summer, the cost of crude has collapsed. Prices are down by a quarter in the past three months. More oil has been pumped at a time when the global recovery has faltered, with traders caught unawares by the slowdown in China and renewed stagnation in the eurozone.

That, though, is not the whole story. The fourfold increase in oil prices triggered by the embargo on exports organised by Saudi Arabia in response to the Yom Kippur war in 1973 showed how crude could be used as a diplomatic and economic weapon. History is repeating itself.
Read more »
Posted by harry_the_great at 14:23 No comments:

Asia for the Asians

Why Chinese-Russian Friendship Is Here To Stay

Recently, China and Russia have challenged the international order by giving each other diplomatic backing to confront Ukraine and Hong Kong, respectively. But Western observers have mostly misunderstood the countries' reasons for building closer ties with each other. They have been motivated less by shared material interests than by a common sense of national identity that defines itself in opposition to the West and in support of how each views the legacy of traditional communism. Moscow and Beijing have disagreements about the future order they envision for their regions. But they agree that the geopolitical order of the East should be in opposition to that of the West—and that has led to significantly closer bilateral relations.

Some Western observers have placed an excessive emphasis on Sino-Soviet tensions during the Cold War era, also arguing that the relationship between Beijing and Moscow is likely to remain fragile because of developments in both countries since the 1990s, including democratization in Russia, globalization in China, and the rapid rise of a middle class with access to outside information in both countries. To the extent that China and Russia built ties, these observers believed that the relationship would be a marriage of convenience that would be trumped by other national interests, including good relations with the West.

But most Westerners have failed to understand that, since the 1990s, officials in China and Russia have deeply regretted the Cold War tensions between their countries. They understand that the problem was less a lack of overlap in national interest than national identities skewed by ideological claims to leadership. Moscow made a critical mistake in expecting that Beijing would acquiesce to its leadership, accepting a role as a junior partner. China's  leadership did not accept that role, given its obsession with ideological superiority. 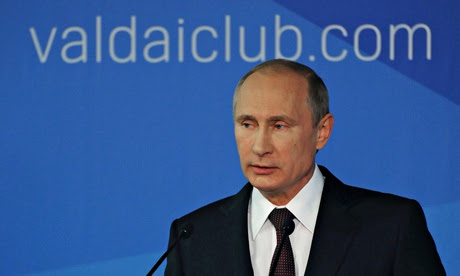 The World Order: New Rules or a Game without Rules

just want to have this link for future reference
Posted by harry_the_great at 14:33 No comments: