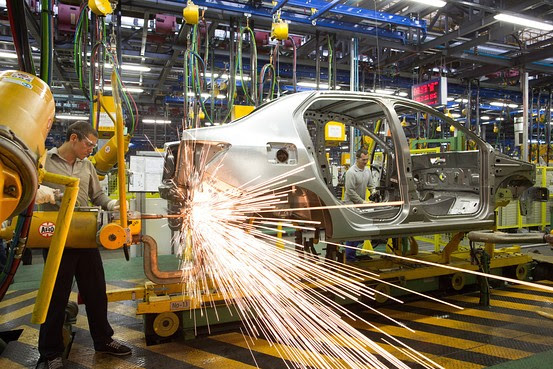 Expanding activity in the manufacturing sector suggests economic growth may receive a boost despite a number of negative factors. Russia's economy is on track to post its weakest growth since President Vladimir Putin came to power in 2000, except for the economic-crisis-hit year of 2009. Western sanctions against Russia over the crisis in Ukraine and Moscow's retaliation in the form of a ban on food imports are also set to take their toll.

New orders grew for the third month in a row, supporting purchasing activity in the economy, although the growth wasn't strong enough to push a rise in backlogs, which shrank for the 18th month running, the PMI data showed.

"Overall, Russian manufacturing holds up surprisingly well against various headwinds. In this respect, the import substitution policy that the government has made a priority can provide support to the manufacturing sector in the short-term," said Alexander Morozov, chief economist at HSBC in Moscow.

The Russian government said the ban on food imports from countries that imposed sanctions on Moscow will have a positive impact on Russia's economy as it will help local producers to expand their business without competition from the European Union, U.S. and Australia.

Russia is likely to experience a supply deficit before local producers increase capacities and take up the slack created by fewer imports. This gap will boost consumer inflation and hamper consumer demand—which is a key economic driver, according to the country's central bank.

Large-scale substitution of imports usually leads to higher costs and output prices growth, which hampers private consumption more than manufacturers can add on the production side, Mr. Morozov said.

"The August PMI price indexes show that this is already happening in Russia. Thus, robust economic activity expansion in the consumer goods sector is unlikely to lead to robust consumption growth," he said.
Posted by harry_the_great at 12:54